Just a couple of hours’ drive from Page, Arizona (the location of HorseShoe Bend and Antelope Canyons) lies the valley of rocks – the Monument Valley! It has a cluster of large Sandstone buttes (an isolated hill with steep sides and a flat top).

Though the tour of the valley was not in our original plan for Arizona/Utah, we decided on a quick trip from Page as we had one afternoon open. The drive itself is through the vast barren landscapes, but as one approaches the Valley at the border of the 2 states, the tourists begin to be seen.

There is a general admission fees of $20 per vehicle and then you can just drive on the 14-mile graded dirt road that takes you through the major monuments – The Mittens, Three Sisters, John Ford’s Point, Totem Pole, Yel-Bichel, Ear of the Wind.

Here’s the John Ford’s Point, followed by the Three Sisters:

There are many monuments there, difficult to capture in just a few hours. One can stop at the designated points though and enjoy the stunning views.

It had snowed a bit there earlier (who can imagine that in the so-called desert!), but it made our outing all the more exciting. This one is my personal favorite from the day (the colors are all natural):

The below shot has Yel-Bicehl on the left and Totem Pole on the right, which has gone through extensive erosion over time!

It was about time for dusk, and that’s when I get super-active. The reason – most of my best shots have come either at dawn or when the sun was about to bid good-bye for the day!

The last shot of the day was that of the Mittens (left and middle one) and of the Merrick Butte (right foreground) – looks magical, isn’t it? 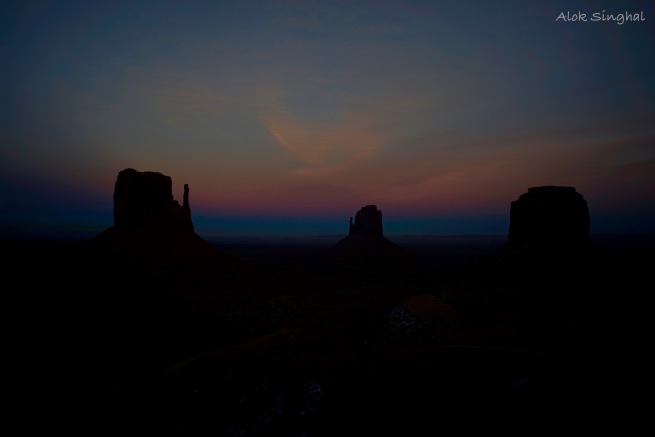 After about 4 hours, we left another of nature’s wonder, but not before collecting a souvenir from a large shop at the entrance.

63 thoughts on “The Valley of Rocks: Monument Valley”