As we made our way further up from the Waimea Canyon lookout, we were soon greeted by the best attraction I have seen till date – Na Pali Coast! We had entered the Na Pali Coast State Wilderness Park, known for its unparalleled beauty – rugged, deep, and narrow valleys, numerous waterfalls cutting across the steep slopes, clouds making their way through these landscapes often, and views of the stunningly blue water. The towering cliffs rise as high as 4,000 ft above the Pacific Ocean.

We were at the most famous and photographed lookout of the valley – Pu’u O Kila Lookout. The views were just jaw-dropping!

The lookout gives a glimpse into the heart of the Kalalau Valley. The valley and the coast as such served as the backdrop of numerous films, including the Jurassic Park. You can even get to the beach and into the valley by following an 11-mile grueling trail (mind you, it is not for everybody).

You will more-often-than-not see clouds floating around…we waited an hour or so for them to pass by for a clear view the second time.

Some people could even see whales from the lookout – the width of the valley at the lookout is at its maximum at two miles. Looking at the whole setting, one can easily make out why it is one of the greatest sights in all of Hawaii! 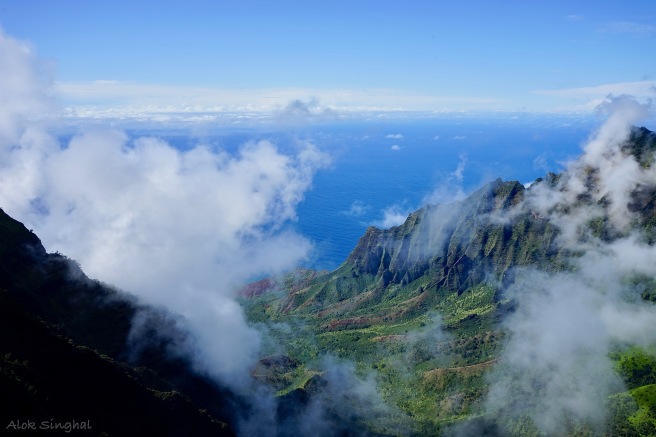 We had a boat tour reserved for the coast the very next day, so just being able to see what we could look forward to created so much excitement in us.

18 thoughts on “The first look of Nā Pali Coast, Kauai”

Follow The Learning Curve on WordPress.com
Join 3,489 other followers